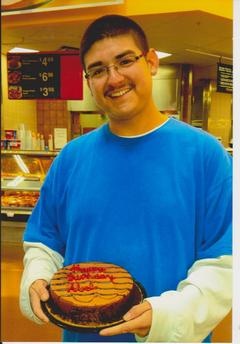 Rosary for Abel Romulo Trevino Jr 21 of Lubbock will be today at 7 PM at Calvillo Funeral Home Chapel. Funeral mass will be celebrated on Thursday at 10 AM at St. Theresa's Catholic Church with Father John Ohlig officiating. Burial will be in The City of Lubbock Cemetery under the direction of Calvillo Funeral Home and Chapel.
Abel went to be with the Lord on Thursday January 1, 2015. He was born on September 5, 1992 to the late Abel Romulo Trevino Sr (2009) and Rebecca Gonzales. He worked for Wal-Mart in the Meat Department and worked part time for Gators Bar. He was a Catholic and a life long resident of Lubbock.
Survivors include his mother Rebecca Gonzales of Lubbock, two brother Jesse Moreno and Jayden Garcia both of Lubbock, two sisters Marisol Trevino and Isabella Trevino both of Lubbock, his paternal grandparents Cindy and Romulo Trevino of Lubbock, his maternal grandparents Antonio and Maria Moreno of Lubbock and a special aunt Veronica Sanchez of Lubbock.
To order memorial trees or send flowers to the family in memory of Abel Trevino, please visit our flower store.