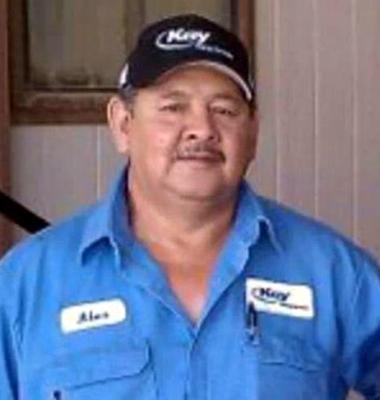 Obituary:
Prayer services for Alejandro "Hondo" Renteria Jr. 55 of O'Donnell will be on Monday January 20, 2014 at 7 PM in Calvillo Funeral Home Chapel-Tahoka.
Funeral services will be on Tuesday at 10 AM in The First Baptist Church of O'Donnell with Rev. Joe Smith pastor of Primera Iglesia of Levelland.
Burial will be in O'Donnell Cemetery under the direction of Calvillo Funeral Home and Chapel.
Hondo passed away on Friday January 14, 2014 in Lubbock. He was born on September 14, 1958 in O'Donnell to the late Alejandro Sr. and San Juana Renteria. He married Michelle Zavala June 2010 in Tahoka. He graduated from O'Donnell High School in 1978. He was a Supervisor for Key Energy in Lamesa. He was a life long resident of O'Donnell.
He is preceded in death by his parents, a brother Roberto Renteria in 2012.
Survivors include his wife of O'Donnell, a son Anthony Renteria of Lubbock, two step sons, Donavan Vasquez and Brise Zavala both of O'Donnell, three daughters Maria Paquin of Steilacoom, Washington, Monica Castillo, Jesica McCue , two step daughters Estavie Vasquez , Laney Moore all of O'Donnell, three brothers Joe Renteria and Miguel Renteria both of O'Donnell, Raul Renteria of O'Donnell, four sisters Alice Lira of Lubbock, Elvia Lunbreras of Austin, Sandra Smith of Levelland and Lisa Orth of Iowa, and 7 grandchildren.

To order memorial trees or send flowers to the family in memory of Alex Renteria, please visit our flower store.