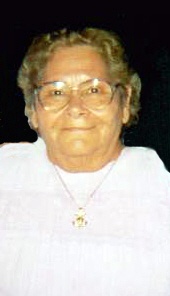 Rosary for Alicia Moreno Gonzales 80, of Lubbock, will be today at 7 PM at Calvillo Funeral Home Chapel in Lubbock. Funeral mass will be celebrated 10:00 a.m.  Friday, March 11, 2016 at St. Jude Catholic Church in Tahoka with Monsignor Jim O’Connor officiating. Burial will be in Tahoka Cemetery under the direction of Calvillo Funeral Home and Chapel.
Alicia passed away on Wednesday March 9, 2016 at her residence. S he was born on April 16, 1935 in Mexico to Jesus & Anita Moreno. She married Juan Juarez Gonzales, November 27, 1950 in Roby, TX and enjoyed being a home maker.  She loved to crochet, sew, bake, going to garage sales and was faithful in the church as she served as a Guadalupana and in the Cursista.

To order memorial trees or send flowers to the family in memory of Alicia Gonzales, please visit our flower store.