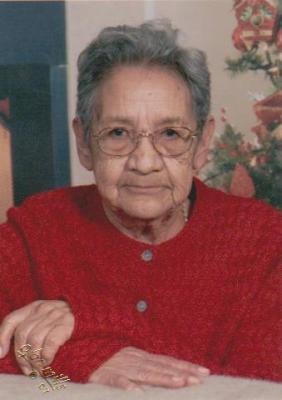 Obituary:
Anita P. Rodriquez, 86 passed away Monday, April 8, 2013 at Heritage Oaks Nursing Home. Services for Mrs. Rodriquez will be 2:00 pm Thursday, April 11, 2013 at Calvillo Funeral Home with Deacon Benny Prito officiating. Burial will follow at Abernathy Cemetery under the direction of Calvillo Funeral Home.
Anita was born July 26, 1926 in Piedras Negras, Mexico to Refugio & Julia Polendo. She married Antonio Rodriques in 1943 and he later passed on February 23, 1984. After retiring from Texas Tech in 1980, she settled down as a homemaker and enjoyed spending time with her grandchildren.
She is survived by one son, Ernest Rodriquez of Lubbock; one brother and a sister; ten grandchildren; twenty nine great grandchildren; nineteen great great grandchildren.
She is preceded in death by her husband; one son, Antonio Rodriquez III; one daughter, Elida Rodriquez; three brothers; two sisters.

To order memorial trees or send flowers to the family in memory of Anita Rodriquez, please visit our flower store.