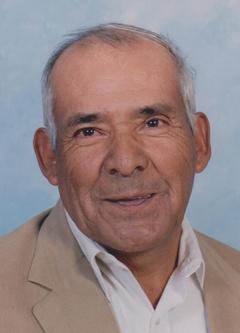 Antonio A. Silvas Sr., 83 went to be with the Lord Friday, August 28, 2015 in Lubbock.  Services for Mr. Silvas will be 10:00 am Monday, August 31, 2015 at St. Jude Catholic Church in Tahoka with Father Roy Badilles officiating.  Burial will follow in Nevels Cemetery under the direction of Calvillo Funeral Home. A rosary will be held 7:00 p.m., Sunday, August 30, 2015 at Calvillo Funeral Chapel in Tahoka (South 4 th and Ave M.)

Antonio was born May 25, 1932 to Pablo and Virginia Silvas in Runge,Texas.  He married Maria Coronado on December 17, 1955 in Tahoka. He was a dedicated farmer for many years; His favorite past times included fishing, playing dominos and poker.

He is preceded in death by two brothers, Domingo Silvas and Ramiro Perez; two sisters Julia Garcia and Vicky Gonzales.

To order memorial trees or send flowers to the family in memory of Antonio Silvas Sr., please visit our flower store.