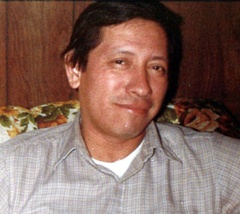 Armando Casas Sr., 72, passed away Friday, March 17, 2017 at Lubbock Hospitality.  Services for Mr. Casas will be 10:00 am Tuesday, March 21, 2017 at St. Joseph Catholic Church with Father Reymundo Manriquez officiating. Burial will follow at the City of Lubbock Cemetery under the direction of Calvillo Funeral Home.  A rosary will be held 7:00 Monday, March 20, 2017 in the Chapel of Calvillo Funeral Home with visitation all day starting at 9:00 am.

Armando was born February v6, 1945 in Mercedes, Texas to Manuel & Jesusa Casas Sr.  He married Jesusa Martinez in 1971 in Lubbock and she later passed away on December 27, 2010.  He worked for Lubbock Solid Waste for a major part of his life before retiring and enjoyed watching the Dallas Cowboys, boxing and spending time with his family and grandchildren.

He is precede in death by his wife, Jesusa Casas.

To order memorial trees or send flowers to the family in memory of Armando Casas, please visit our flower store.