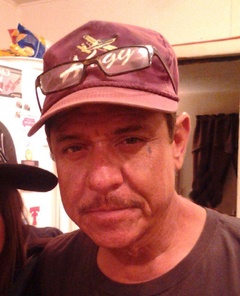 Visitation for Carlos “Charlie” Gonzales will start on Saturday February 28, 2015 at 1 PM till 9 PM and on Sunday at 10 AM till 9 PM and services will follow as:

Rosary for Carlos "Charlie Gonzales 52 of O'Donnell will be Sunday March 1, 2015 at 7 PM at Calvillo Funeral Home Chapel-Tahoka. Mass will be celebrated on Monday at 10 AM at St. Judes Catholic Church with Father Edward Teo officiating. Burial will be in the Nevels Cemetery under the direction of Calvillo Funeral Home and Chapel.
Charlie was called to be with the lord on Tuesday February 24, 2015. He was born on September 8, 1961 in Tahoka to late Gilbert Sr and Irene Gonzales.  He married Francis Barrientos in O'Donnell, Charlie loved to collect antiques and love to spend time with his family. Charlie was a farmer for Brad Williams Farms in O'Donnell.
Survivors include his wife Frances Gonzales, four sons Carlitos Gonzales Jr and Benny Gonzales both of Tahoka, James Gonzales of Dallas, Carlos Gonzales of Lubbock, seven daughters Virginia Gonzales, Michelle Barrientos, Victoria Pesina, Gina Villarreal, and Pat Pesina all of Lubbock, Amanda Pesina of Brownfield and Crystal Trevino of Midland, four brothers Manuel Gonzales of San Antonio, Jesse Gonzales, Tony Gonzales and Gilbert Gonzales Jr all of O'Donnell, two sisters Sara Nava of O'Donnell and Ester Gonzales of Houston, 21 grandchildren and 3 great grandchildren

To order memorial trees or send flowers to the family in memory of Carlos Gonzales, please visit our flower store.