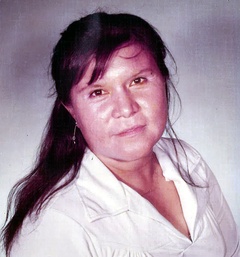 Rosary for Cuca Moya, 69 of O’Donnell died April 10, 2018, will be at 7:00 p.m., Thursday, April 12, 2018 in Calvillo Funeral Home Chapel in Tahoka. Funeral Mass for Mrs. Moya will be 10:00 a.m., Friday, April 13, 2018 at St. Jude Catholic Church in Tahoka with Father John Rathinam officiating. Burial will follow in Nevels Cemetery under the direction of Calvillo Funeral Home and Chapel.
Mrs. Moya was born July 7, 1948 in Mathis to Jose and Ines Garza. She was a Catholic. She later went on to marry Guadalupe “Lupe” Moya in 1972 in Tahoka and loved playing bingo and to garden. Her greatest joy in life however was being with her family.
She is preceded in death by her sons Joe Garcia and Christopher Lee Moya.
Those left to cherish her memory are her husband Guadalupe “Lupe” Moya of O’Donnell; sons Lupe Moya Jr. of Plainview and Jesus Moya of Tahoka; daughters Juanita Renteria of Lubbock, Dolores Lira of Houston and Suana Moya of Lamesa; brothers Ramon Garza of Brownfield and Juan Garza of O’Donnell; sisters Maria Tejeda of Kingsville, Dolores Herrera of Arizona, Manuela Herrera of Slaton, Juanita Garcia of Dallas and Chepa Flores of Post; twenty one grandchildren and eighteen great grandchildren.
To order memorial trees or send flowers to the family in memory of Cuca Moya, please visit our flower store.