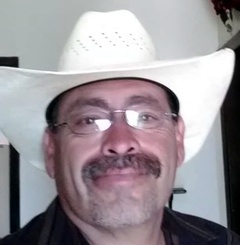 Rosary for Daniel Silvas Garcia 51 of Lubbock will be on Tuesday, September 26, 2017 at 7 PM at Calvillo Funeral Home Chapel in Tahoka. Funeral Mass will be celebrated on Wednesday, September 27, 2017 at 2:00pm at St. Jude Catholic Church with Father John Rathinam officiating. Burial will follow immidiately in Nevels Memorial Cemetery in Tahoka under the direction of Calvillo Funeral Home & Chapel. Mr. Garcia passed away Wednesday, September 20, 2017. He was born October 13, 1965 in Slaton to the late Victor and Julia Garcia. In 2014 Daniel went onto to marry Guadalupe Vargas in Lubbock; He was a catholic, loved sports and a good handyman. His loving family will always remember that Mr. Garcia was willing to lend a helping hand to those who were in need. He is preceded in death by his parents; a brother David Garcia; Sister Isabel Gonzales and a nephew Alfredo Resendez. Those left to honor his memory are his two sons Adrian Gregory Garcia of Lubbock and Steven Daniel Garcia of Muleshoe; Daughter Garbrielle C. “Gabby” Garcia of Brownfield; Brothers Victor Garcia, Jr. of Lubbock, Benjamin Garcia of Washington and Hyram Garcia of Hobbs, NM; Sisters Rachel Corona of Tahoka, Dolores Resendez of Seminole, Patricia Garcia of Tahoka and Nueme Torres of Washington. Six Grandchildren and four great grandchildren.

To order memorial trees or send flowers to the family in memory of Daniel Garcia, please visit our flower store.