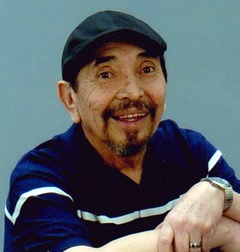 Funeral services for Domingo Ybarra Jr. 64 of Lubbock will be Friday, March 11, 2016 at 10 AM at Aldersgate United Methodist Church with Pastor Ryan Smallwood officiating. Cremation will be under the direction of Calvillo Funeral Home and Chapel.
Domingo went to be with the Lord on Sunday, March 6, 2016. he was born on June 1, 1951 in San Marcos, Texas to Domingo Sr. and the late Julia Ybarra.
He married Isabel Vasquez on February 5, 2016 in Lubbock.
Domingo was a maintenance man for Bakers Office Supply before coming ill. He was a devout christian and husband, he was loved by his family and will be greatly missed.
Survivors include his wife Isabel Ybarra of Lubbock, four sons Robert Ybarra and Domingo Ybarra III both of Grand Prairie, Joshua Eloy Reyna of Lubbock, Jeremiah Eli Vasquez of Austin, five daughters Tammy Ybarra, Felicia Ybarra, Anna Gomez, Raquel Reyna Martinez and Sophia Quintero all of Lubbock his father Domingo Ybarra Sr of Lubbock, a brother Jose Ybarra of Lubbock a sister Olga Arrizola of Lubbock, 19 grandchildren and 11 great grandchildren.

To order memorial trees or send flowers to the family in memory of Domingo Ybarra Jr., please visit our flower store.