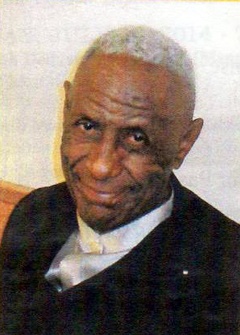 Elder Johnny Lee Barnes was born April 23, 1938 to the late Johnny Barnes and Maggie Johnson in Los Angeles, CA. Later he was raised in Lubbock, TX by E.L. Tatum. He attended LISD graduating at the mere age of 15. Shortly after graduating high school he went on to attend Dental College. During his younger years; he accepted Christ into his life.

Elder Johnny began his ministry walk in 1989 under the leadership of Rev. J.H. Ford of Lubbock, TX. Elder Johnny quickly fell in love with the Gospel of Jesus Christ in which he wanted to shape this love with everyone he came in contact with. Elder Johnny would share the good news of Jesus Christ in any setting whether at church, United Supermarket, Cast Iron Grill “while shining shoes”, the golf course, and of course to his family  both in and out of church. Elder Johnny Barnes spent a lot of days feeding the hungry in “Tent City.”  While feeding he would offer up Christ. Johnny being unselfish was a cheerful giver to many; naturally, physically, emotionally and most of all, spiritually - even in his last days. In 2010 Elder Johnny answered the call to become the spiritual father of Greater Saint James Baptist Church in the role of Pastor where he served faithfully until God called him home.

A special thanks to his loving mother Bessie White, Linda Brown and Deacon Hollins.

Services for Mr. Barnes will be 10:00 am Saturday, November 28, 2015 at Greater St. James Baptist Church with Pastor J. J. Johnson officiating.  Burial will follow in the City of Lubbock Cemetery under the direction of Calvillo Funeral Home.  Family will accept friends 6:00 pm tonight at Calvillo Funeral Home.

“I love you and there is nothing you can do about it.” Elder Johnny Barnes

To order memorial trees or send flowers to the family in memory of Elder Johnny Barnes, please visit our flower store.