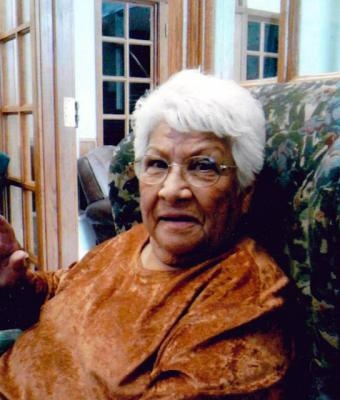 Obituary:
Rosary for Ester Cazares 82 of Lubbock will be today at 7 PM at Calvillo Funeral Home.Funeral services will be on Saturday March 1, 2014 at 2 PM at Calvillo Funeral Home Chapel. Burial will be in The O'Donnell City Cemetery under the direction of Calvillo Funeral Home and Chapel.
Ester passed away on Wednesday February 26, 2014 in Lubbock. She was born on September 10, 1931 in Maxwell, Texas to the late Pedro and Julia Garcia. She married Jose Salinas Cazares Jr.in 1948 in Tahoka, he preceded her in death on September 11, 1995.
Ester was a homemaker, she loved to sew and cook for her family. She enjoyed working on her yard and spending time with her family. She was a Catholic.
She is preceded in death by a son Ramiro Cazares, two daughters Luisa Salinas and Andrea Cazares.
Survivors include three sons Ruben (Mary) Cazares of San Antonio, Ramiro (Rosa) Cazares of Abilene and Jose Cazares III of Lubbock, four daughters Martha (Gilbert) Garcia, Dora (Rudy) Paderez, and Elva Vasquez all of Lubbock, Rosa Maldonado of Abilene, a brother Ascencion Garcia of San Marcos, 24 grandchildren, 57 great grandchildren and 10 great great grandchildren.

To order memorial trees or send flowers to the family in memory of Ester Cazares, please visit our flower store.