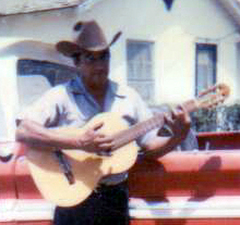 Eddy went to be with the Lord on Sunday, July 10, 2016. He was born on February 12, 1936 in Italy, Texas to the late Marcos and Eulalie Rodriguez. He was a retired plumber. He loved to play his guitar and accordion, and he loved  music.

To order memorial trees or send flowers to the family in memory of Eulalio "Eddy The Plumber", please visit our flower store.