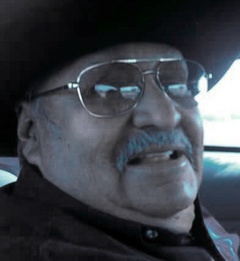 Rosary   for   Eulogio "Low Rider" Granado 78 of Lubbock formerly of Pear Valley. Will   be   held  on Sunday   October 11, 2015 at 7 PM at Heritage Funeral Home Chapel in Brady, Texas. Funeral mass will be celebrated on Monday 10:00 am   October 12, 2015 at St. Patricks Catholic Church in Brady, Texas with Deacon Robert Felvera officiating. Burial will be in Lohn Cemetery under the direction of Heritage Funeral Home.
Eulogio passed away on Wednesday October 7, 2015. He was born on March 3, 1937 in  Kenedy, Texas to the late Geronimo and Bertha Reyes. He married Cipriana Mendez in July of 1954. He was a retired Farmer. He loved to spend time with his family, he enjoyed working and driving tractors, and raising animals. he had a beloved pet "La Prieta".
He is preceded in death by a daughter Ester Granado
He is survived by his wife of Lubbock, two sons Eulogio Granado Jr. of Washington,                        Jesus Granado of Pear Valley, five daughters Vicky Soto of Brady, Janie Benavidez of  Brady, Yolanda Arredondo of Lubbock, Francisca Torres of Menard, and Anita Hernandez of Pear Valley, two brothers Domingo Granado Sr of Lubbock, Celestino Granado of Runge, a sister Dolores Sifuentes of Lubbock 23 grandchildren and 26 great grandchildren. .

To order memorial trees or send flowers to the family in memory of Eulogio Granado, please visit our flower store.