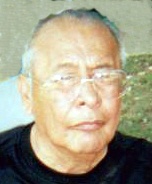 Rosary for Fred “Cale” Gaytan 77 of Lubbock will be Friday at 7 PM  at Calvillo Funeral Home Chapel. Mass will be celebrated on Saturday, September 5, 2015 at Our Lady of Guadalupe Catholic Church with Monsignor Jim O’Connor officiating. Burial will be at Englewood Cemetery under the direction of Calvillo Funeral Home and Chapel.

Mr. Fred was born on September 21, 1937 in Nixon,Texas to the late Esmerhildo and Nicholasa Gaytan. He married Janie Sanchez on January 4, 1955 in Lubbock. Before retiring he was a gin repairer. He love to cook Bar-B-Que for his family and friends often starting on Friday and finishing on Sunday. He loved to fish. He was a member of Our Lady of Guadalupe.

He is preceded in death by two sons Billy Gaytan and Gilbert Gaytan, a sister Aurora  ‘YaYa” Zuber

To order memorial trees or send flowers to the family in memory of Fred Gaytan, please visit our flower store.