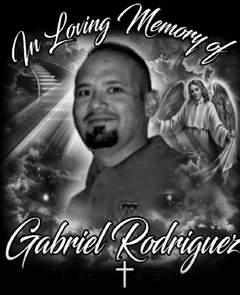 Mr. Rodriguez passed away on Wednesday, September 12, 2018 in Lubbock. He was born February 19, 1982 in Lubbock to Manuel Rodriguez and Janie Meza. He worked in construction as a trans flooring technician. Gabriel was a very happy individual who always had a good outlook on life and enjoyed spending time with his family, in particular; his nieces and nephews. However; his greatest joy in life was reading his bible and spreading the word of the Lord.

He is preceded in death by his father Manuel Rodriguez, a brother Isaias Rodriguez; his grandparents Manuel and Demecia Rodriguez and a step brother Jacob Meza.

To order memorial trees or send flowers to the family in memory of Gabriel Rodriguez, please visit our flower store.