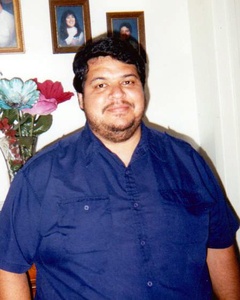 Funeral services for Gilbert Gonzales Jr 50 of O'donnell will be on Friday May 28, 2015 at 10 AM at Calvillo Funeral Home Chapel-Tahoka, with Alan Ehlo officiating. Burial will be in the Nevels Cemetery under the direction of Calvillo Funeral Home and Chapel.
Gilbert went to be with the Lord on Saturday May 23, 2015. He was born on November 7, 1964 in Tahoka to the late Gilbert, Sr and Irene Gonzales. He married Delia Serrato in November of 1988 in San Antonio. He had lived in Alabama for a few years before returning to O'donnell. He was a Supervisor for Cliff Appartments. Gilbert loved to have cookouts with his family, he enjoyed watching the San Antonio Spurs, the Dallas Cowboys, the Atlanta Braves and Atlanta Falcons. Gilbert was loved by everyone and well be missed.
Survivors include his wife of Plainview, two sons, Gilbert Gonzales III of O'donnell and Anthony Vega of Lubbock, eight daughters Emily Habeck of Nashville, Tennessee,  Priscilla Lewis, Ashely Tate, Michelle Gonzales, Basia Gonzales, Julia Gonzales, Sarah Gonzales all of Huntsville, Alabama and Jennifer Avalos of Shallowater, three brothers Jesse Gonzales and Tony Gonzales both of O'donnell , Manuel Gonzales of San Antonio, two sisters Sara Nava of O'donnell and Ester Gonzales of Houston, 20 grandchildren.

To order memorial trees or send flowers to the family in memory of Gilbert Gonzales Jr, please visit our flower store.