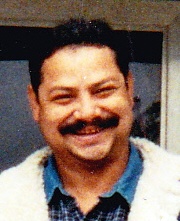 James Franklin Smith, 50 passed away Friday, May 5, 2017 at his residence. Services for Mr. Smith will be 2:00 pm Monday, May 8, 2017 at St. Phillip Benizi Catholic Church.  Burial will follow at Peaceful Gardens Memorial Park under the direction of Calvillo Funeral Home. A rosary will be held 7:00 pm, Sunday, May 7, 2017 at Calvillo Funeral Home.

James was born July 11, 1966 in Lawton, OK to Matilde & Pauline Gonzales.  He married Felicitas Cuellar on October 2, 2016 in Hereford.  He was a member of the Knights of Columbus and enjoyed watching the Cowboys and Texas Tech football.  His pass times included golfing, camping and fishing but what he loved the most was spending time with his family and grandchildren.

He is preceded in death by his father, Matilde Gonzales.

To order memorial trees or send flowers to the family in memory of James Smith, please visit our flower store.