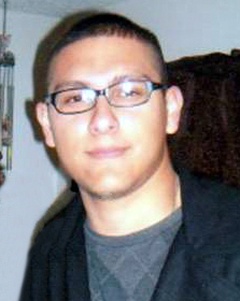 Jesse “Jay” Peralez Jr., 22 passed away Friday, November 14, 2014 at his residence.  Services for Mr. Peralez will be 10:00 am Friday, November 21, 2014 at St. Patrick Catholic Church with Monsignor Jim O’Connor officiating.  Burial will follow at Peaceful Gardens Memorial Park under the direction of Calvillo Funeral Home.   A rosary will be held 7:00 pm tonight, at Calvillo Funeral Home.

Jesse was born on February 9, 1992 in Pasadena to Evonne Gonzales.  He graduated from Lubbock High in 2010 and worked at Texas Roadhouse as the lead prep.  He enjoyed listening to music, playing video games, collecting guns and keeping up with world society.

To order memorial trees or send flowers to the family in memory of Jesse Peralez Jr., please visit our flower store.