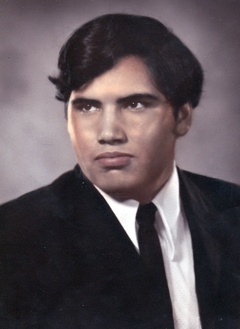 Rosary for Jose Luis Gonzales, 63 of Kyle, TX will be on Sunday, November 26, 2017, 7 PM at The Chapel in Broadway Funeral Directors. Funeral Mass will be Monday, November 27, 2017, 10AM at St. Jude Catholic Church in Tahoka with Deacon Pete Paniagua officiating. Burial will follow in Nevels Cemetery under the direction of Broadway Funeral Directors.Mr. Gonzales passed away on Tuesday, November 21, 2017 at his residence in Kyle, TX. He was born December 25, 1953 to Juan and Alicia Gonzales and was a 1974 Tahoka High School graduate. Jose worked as a truck driver for many years and was a faithful Catholic throughout his life.

He is preceded in death by a brother Antonio Gonzales and a sister Anita Gonzales.

To order memorial trees or send flowers to the family in memory of Jose Gonzales, please visit our flower store.