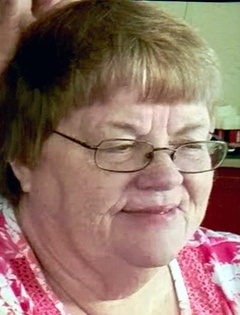 Joy Lynn Martin 71, passed away December 8, 2015 at her residence. Services for Mrs. Martin will be Tuesday, December 15, 2015 at 10:00 am at Lone Star Cowboy Church with Pastor Jerry Stewart officiating. Burial will follow in Lamesa Memorial Park under the direction of Calvillo Funeral Chapel. A prayer service will be held Monday, December 14, 2015 at 7:00pm at Calvillo Funeral Chapel.

Joy was born October 1,1944 in Denton to Howard and Carmen Sires. After graduating high school, Joy received her certification and worked as an LVN for most of her life. She married Rassie Martin Jr. on July 5,1978 in Brownfield Texas. She enjoyed playing bingo, Pogo and spending time with her family and grandchildren.

She is preceded in death by her parents.

To order memorial trees or send flowers to the family in memory of Joy Martin, please visit our flower store.