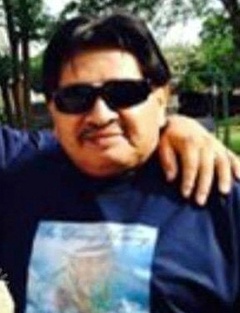 Juan F. Mireles, 60, passed away Thursday, November 23, 2017 in Lubbock.  Services for Mr. Mireles will be 3:00 pm, Saturday, November 25, 2017 at Calvillo Funeral Chapel with Rev. Alan Ehlo officiating.  A visitation will be held from 1:00 pm to 3:00p.m. Services were made under the direction of Calvillo Funeral Home.
Juan was born November 22, 1957 in Ralls to Esteban & Nieves Mireles.  He worked as a truck driver for most of his life and enjoyed raising roosters, watching and competing in racing and spending time with his grandchildren and children.  He was a man who loved to laugh and made sure he lived his life to the complete fullest.
He was preceded in death by his parents, two brothers, and a grandson Kevin Mendoza.
He is survived by four daughters; Josie Mireles, Melissa Mireles, Miranda Mireles, and Elizabeth (Kevin) Mendoza, all from Lubbock; seven brothers; Gabino Mireles, Simon Mireles, Esteban Mireles, Rey Mireles, Raymundo Mireles, Martin Mireles, and Rene Mireles; one sister Maria Mireles; six grandchildren.

To order memorial trees or send flowers to the family in memory of Juan Mireles, please visit our flower store.