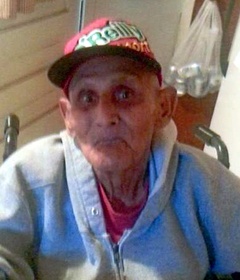 Rosary for Juan A. Nombrana 90 of Lubbock will be today at 7 PM at Calvillo Funeral Home Chapel.
Funeral mass will be celebrated on Thursday at 10 AM at St. Patrick's Catholic Church with Father Jim O'Connor officiating. Burial will be in Peaceful Gardens Memorial Park under the direction of Calvillo Funeral Home and Chapel.
Juan was called to be with the Lord on Tuesday August 17, 2015. He was born on February 1, 1925 in Kingsbury, Texas to the alte Mariano and Mariana Nombrana.  He married his love of his life of 56 years, Paz Corona on December 23,1959 in San Marcos,Texas. Juan had retired from Farm Pac.  He was a usher for many years at St. Patrick's before coming ill. He was a big fan of the Washington Redskins. He loved enjoyed listening to music. He was a Cursillista and a Catholic.
Survivors include his wife of Lubbock, six sons, John Nombrana of Austin, Richard Nombrana, Ernest Nombrana, Miguel Nombrana, Robert Nombrana and Phillip Nombrana all of Lubbock, five daughters Sally Frausto, Frances Silvas, Dolores DeLeon, Sylvia Cristan, Rosa Berumen all of Lubbock, two brothers Ted Nombrana of Norman OK, and Richard Nombrana of San Marcos, a sister Connie Rivas of San Marcos, 40 grandchildren, 62 great grandchildren and 6 great great grandchildren.

To order memorial trees or send flowers to the family in memory of Juan Nombrana, please visit our flower store.