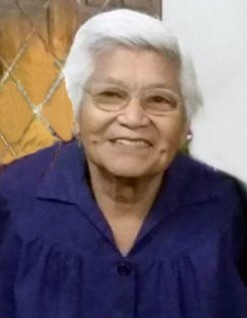 Juanita Gonzalez Mosqueda, 85 of Lubbock passed away Sunday, February 27, 2022.  Visitation will begin Friday, March 4, 2022, at Calvillo Funeral Home from 1:00 p.m.–8:00 p.m., with a rosary beginning at 6:00 p.m. the same evening. Funeral Mass will begin, 10:00 a.m., Saturday, March 5, 2022, at St. Patrick’s Catholic Church with Father Joseph Thanavelil officiating. All arrangements were made under the direction of Calvillo Funeral Home & Chapel.

Juanita was born June 26, 1936, in Karnes City, Texas to the late Julian and Micqueda Gonzalez. In 1954, she married Bonifacio Mosqueda Sr. in Karnes City. Juanita was Catholic and served as a Guadalupana for St. Patrick’s Catholic Church. She was a hard worker and worked numerous years in the restaurant business, namely for La Melinche and Jose Ramirez Restaurant. She also worked for The Holiday Inn Hotel. However, Juanita’s greatest joy in life was spending time with her family.

To order memorial trees or send flowers to the family in memory of Juanita Mosqueda, please visit our flower store.