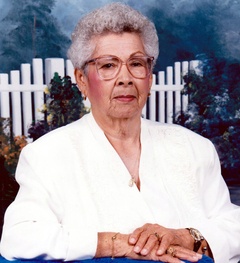 Rosary for Juanita B. Ortiz 95 of Robbinsdale, Minnesota was held Friday, February 13, 2015 at 7:30 PM at Calvillo Funeral Home. Funeral mass was held on Saturday, February 14, 2015 at St. Mary Magdalen Catholic Church with father Reynaldo Pahamtana officiating. Burial will be in the City of Earth Cemetery.
Mrs. Ortiz was called to be with the Lord on Wednesday, February 11, 2015 in Robbinsdale, MN. She was born on June 24, 1918 in Raymondsville, Texas to the late Antonio and Augustina Barboza. She married Isabel Ortiz on July 26, 1939 in Raymondsville, Texas, he preceded her in death in 1988.
Mrs. Ortiz was a Catholic and a Cursillista. She had a passion for cooking which resonated through the food she made for her family; Rudy mentioned that the stacks of tortillas she use to make for him would stay nice and soft for a week mentioning that they are not made like that today. Any of her children and grandchildren would tell you that the pancakes she made were the best. She always asked the Lord to give her time to see her children and grandchildren grow and was allowed to until the age of 95. Family mentioned that anything said about her would have to be in another room due to her amazing hearing. She fought diabetes since the age of 55 but always controlled it making her fight a very good one.
She is preceded in death by two daughters, Pam Astogan in 2011 and Isabel Cardona in 1998.
Survivors include two sons, Rudy Ortiz of Lubbock, Jose Gonzales of Earth and a daughter Maria Hernandez of Smyer, 18 grandchildren and numerous great grandchildren.

To order memorial trees or send flowers to the family in memory of Juanita Ortiz, please visit our flower store.