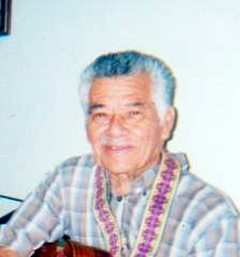 Rosary for Julio S. Sanchez, Sr 82 of Lubbock will be today at 6 PM at Calvillo Funeral Home Chapel. Funeral Mass will be celebrated on Monday, January 30, 2017 at Our Lady of Guadalupe Catholic Church at 2 PM with Father Martin Pina officiating. Burial with military honors will be in Peaceful Gardens Memorial Park under the direction of Calvillo Funeral Home and Chapel.
Julio was called home to be with the Lord on January 26, 2017. He was born on March 22, 1934 in Robstown, Texas to the late Margarito and Julia Sanchez. He married Juanita Garcia on June 2, 1989 in Corpus Christi, Texas. He had served in US Army from 1955 to 1957. He retired from the US Postal Services. He was formally in the music ministry at Our Lady of Guadalupe Catholic Church. Julio loved the ocean waters. He enjoyed playing his guitar and fishing.
He is preceded in death by a daughter Linda Sanchez, two brothers Martin and Narcisso, three sisters Juanita, Diamantina and Rufina.
Survivors include his wife of Lubbock, three sons, Julio Jr. and wife Sheryl of Pearland, Daniel Sanchez and Daniel Garcia both of Lubbock, two daughters Sylvia Sanchez and Diana Sanchez both of Lubbock,two grandaughters Aeriell and Desiree, a grandson Alec, four great grandchildren Chris, Jessie Jr, Jeremiah and Azaryan, two brothers Alfred Sanchez and Ray and wife Aurelia all of Lubbock, three sisters Maria Barron and Margarita Romo both of Lubbock, Beatrice Solis of Mercedes.

To order memorial trees or send flowers to the family in memory of Julio Sanchez, please visit our flower store.