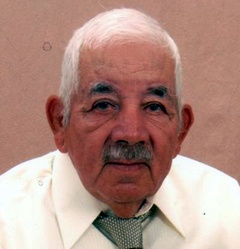 Justino was born April 14, 1933 in George West to Genaro & Carmen Cruz. He married the late Luisa Gonzales on July 8, 1959 in El Paso and worked as a carpenter for most of his life. He was a hard worker and loved spending time with his family and grandchildren.

To order memorial trees or send flowers to the family in memory of Justino Cruz, please visit our flower store.