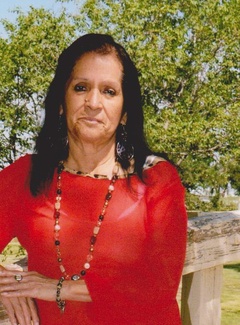 Margarita Reyes Mata was born on February 19, 1945 in Corsicana, TX. She returned to her heavenly home on Monday April 10 , 2015 in Lubbock. She was a dedicated homemaker whom loved dancing,cooking, decorating and shopping. She brightened the lives of many and will be deeply missed by her children, family, and by all who knew her.
She is preceded in death by her daughter, Irene Mata; three sisters, Lupe Rodriguez, Janie Rodriguez and Lilly Rodriguez.  She is survived by her husband Marcial Marez of Lubbock; her daughter Margarita Mata of Lubbock; her five sons, Jesse Mata, Steve Mata, Epifanio Mata, Pedro Garcia and J.R. Garcia all of Lubbock and her sister Tommie Garcia of Odessa, a brother Rafael Reyes of Corsicana, 19 grandchildren and 18 great grandchildren . Prayer services will be held on Sunday, April 12, 2015, at 7 p.m. at Calvillo Funeral Home Chapel.  Funeral services will be celebrated on Monday, April 13, 2015, at 11 a.m. at Ministerios Nueva Vida with Reverend Chris Lopez officiating.  Burial will be at City of Lubbock Cemetery under the direction of Calvillo Funeral Home and Chapel.
To order memorial trees or send flowers to the family in memory of Margarita Mata, please visit our flower store.