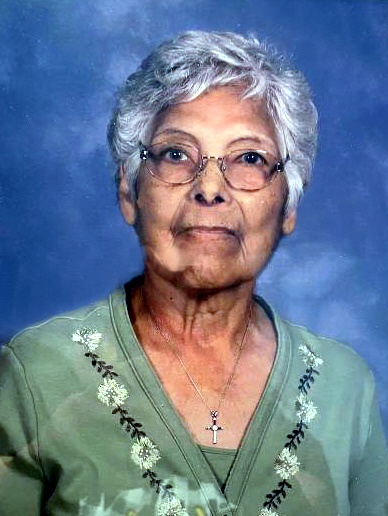 Maria Belen Pacheco, 95 of Lubbock passed away Monday, September 13, 2021.  Visitation will begin Sunday, September 19, 2021, at Calvillo Funeral Home Chapel (Lubbock) from 2:00 p.m.–9:00 p.m., with a rosary beginning at 7:00 p.m. the same evening. Funeral Mass will be celebrated 10:00 a.m., Monday, September 20, 2021, at St. Patrick’s Catholic Church with Father Joseph Thanavelil officiating. Burial will follow at Peaceful Gardens Memorial Park all arrangements were made under the direction of Calvillo Funeral Home and Chapel.

Maria was born September 9, 1926, in San Benito, Texas to the late Elias and Tirsa Gaona. Later in 1951, Maria went onto marry Manuel Pacheco in Lyford, Texas, he preceded her in death in 1961. Maria worked for Methodist Hospital, in Environmental Services for twenty-two years, before retiring. She enjoyed watching sports, specifically football and baseball, her favorite teams were The Texas Tech Red Raiders, The Pittsburgh Steelers, The San Francisco 49ers, and The Texas Rangers. Her other past times included playing cards and bingo. However, her greatest joy in life was spending time with her family, they will always cherish the memories they have with her.

To order memorial trees or send flowers to the family in memory of Maria Pacheco, please visit our flower store.