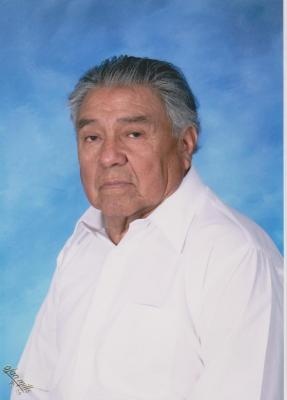 Visitation Information:
Rosary will be held at 7:00 pm Tuesday, May 6, 2014 at Calvillo Funeral Home

Obituary:
Nicolas "Rudy" Ramos, 75 passed away Thursday, May 1, 2014 at Covenant Specialty Hospital. Services for Mr. Ramos will be at 10:00 am Wednesday, May 7, 2014 at St Joseph Catholic Church with Father Martin Pina officiating. Cremation arrangements were made under the direction of Calvillo Funeral Home.
Nicolas was born on September 10, 1938 in Pearsall to Trinidad and Refugia Ramos. He married Lydia Vasquez on December 1, 1975 in Lubbock. He worked as a farm hand for most of his life and enjoyed dancing, listening to music and playing the bass guitar and maracas with local bands.
He is survived by his wife Lydia Ramos of Lubbock; two sons, Andrew Ramos, John Figeroa both of Lubbock; five daughters, Sylvia Figeroa, Debbie Granados, Andrea Jimenez, Leticia Ramos, Amanda Munoz all of Lubbock; four sisters, Carolina Villanueva of Bandera, Carmen Rosales of Kerrville, Isabel Martinez of San Antonio, Norma Celandra of Louisville, TX; sixteen grandchildren; nine great grandchildren.
He is preceded in death by one grandchild, Robert Chavez Jimenez; one brother, Joe Leal.

To order memorial trees or send flowers to the family in memory of Nicolas Ramos, please visit our flower store.