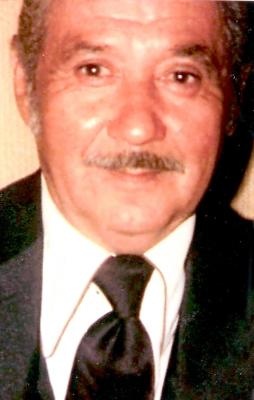 Obituary:
Rosary for Oscar P. Juarez 82 of Lubbock will be today at 7 PM at Calvillo Funeral Home. Funeral mass will be celebrated on Thursday March 14, 2013 at St. Patrick's Catholic Church with Monsignor Jim O'Connor officiating. Burial will be in Peaceful Gardens Memorial Park under the direction of Calvillo Funeral Home and Chapel.

Mr. Juarez passed away on Sunday March 10, 2013 in Lubbock. He was born on December 28, 1930 in Crystal City Texas to the late Arturo and Maria Juarez. He married Margarita Lujan in August of !976. He had worked for Scotts Manufacture as a welder before retiring. He loved to play bingo and enjoyed being with his family and his pet Ork.

He is preceded in death by two brothers, Valdo Juarez and Arturo Juarez Carter, his step father Pablo Suliaca Sr. in 1976


To order memorial trees or send flowers to the family in memory of Oscar Juarez, please visit our flower store.