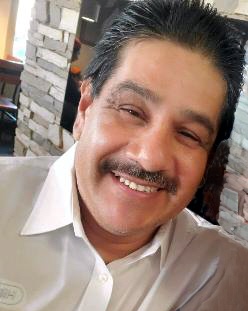 Viewing and visitation for Rocky Guel, 50 of Lubbock will begin 10:00 a.m., Friday, November 20, 2020 at Ministerios Nueva Vida (201 N. Boston) with a prayer service beginning at 6:00 p.m. the same day in the Church. Funeral services will be held 10:00 a.m., Saturday, November 21, 2020 at Ministerios Nueva Vida with Rev. Jesse Cisneros officiating. Burial will follow in The City of Lubbock Cemetery under the direction of Calvillo Funeral Home & Chapel.

Mr. Guel was called to be with the Lord, Thursday, November 19, 2020. He was born on April 17, 1970 in Guymon, Oklahoma to Cirilo Guel Sr. and Yolanda Rojas. Rocky enlisted in The United States Army and served in Desert Storm before being honorary discharged. In June of 2007, Rocky married Ana Alvarado in Lubbock cherishing thirteen years of marriage. He was a truck driver for numerous years, he enjoyed cookouts and singing. Rocky kept the faith as a Christian, and had a passion ministering during church services. His family will always cherish and remember the love he had for them.

He is preceded in death by his father Cirilo Guel Sr.

To order memorial trees or send flowers to the family in memory of Rocky Guel, please visit our flower store.