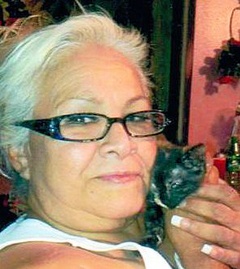 Rose was born May 4, 1949 in O’Donnell to Jose & Esther Cazares.  Loving wife of Rumaldo Martinez, she worked as a cashier at Wal-Mart for many years and loved spending time with her family and grandchildren.

She is preceded in death by one sister, Luisa Salinas.

To order memorial trees or send flowers to the family in memory of Rose Maldonado, please visit our flower store.