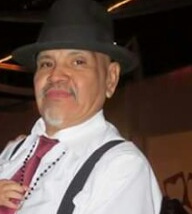 Visitation for Rudy Carrizalez 48 of Lubbock will be from 3 PM till 9 PM today.
Rosary will be on Monday March 30,2015 at 7 PM at Calvillo Funeral Home Chapel. Mass will be celebrated on Tuesday March 31,2015 at 2 PM at St. Joseph's Catholic Church with Father Martin Pina officiating. Burial will be in Peaceful Gardens Memorial Park under the direction of Calvillo Funeral Home and Chapel.
Rudy went to be with the Lord on Friday, March 27, 2015. He was born on November 3, 1966 in Lubbock to Alfredo and the late Inez Carrizalez. He married Yolanda Garcia on February 14, 2015 in Lubbock. He was a shelf assembler for Vaughn Storage. Rudy liked to dance often making everyone laugh and being the center of the party. He loved to spend time with his family, his son was his pride and joy.
Rudy is preceded in death by his mother Inez Carrizalez in 2009, two brothers Andy Carrizalez in 1996 and  George Carrizalez in 2011.
Survivors include his wife Yolanda Carrizalez of Lubbock, two sons Rudy Carrizalez Jr and Darious Hughes of both of Lubbock, a daughter Jasmine Hughes of Lubbock, his father Alfredo Carrizalez of Lubbock, a brother Joe and wife Frances of Lubbock, a sister Carolyn Carrizalez of Lubbock

To order memorial trees or send flowers to the family in memory of Rudy Carrizalez, please visit our flower store.