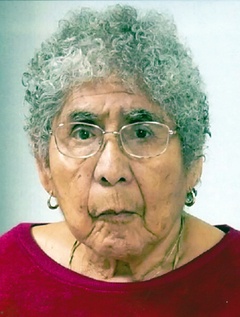 Sofia Reyna Pena, 90, passed away Tuesday, August 29, 2017 in San Angelo.  Services for Mrs. Pena will be 2:00 pm Saturday, September 2, 2017 in Trinity Worship Center in Crosbyton with Pastor Joe Alex Lara officiating.  Burial will follow in Ralls City Cemetery under the direction of Calvillo Funeral Home.  A prayer service will be held from 6:00pm to 8:00 pm. Friday, September 1,2017 at Calvillo Funeral Home.

Sofia was born April 5, 1927 in Ecleto, TX to Juan & Ramona Reyna.  She married the late Eliseo Pena on March 25, 1945 in Panna Maria, TX.  She was a homemaker during her lifetime and enjoyed spending time with her family and grandchildren.

She is preceded in death by her husband Eliseo Pena (April 2, 2009); two grandchildren, Cristina Moreno Garza and Randy Pena.

To order memorial trees or send flowers to the family in memory of Sofia Pena, please visit our flower store.