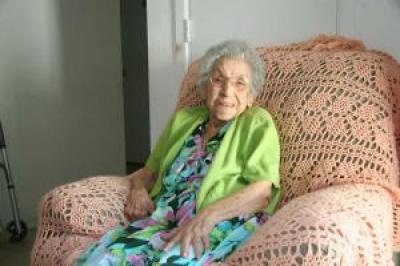 Visitation Information:
Rosary will be Thursday January 16, 2014 at 7:00 pm at Calvillo Funeral Home.
Service will be at 10:00 am at Our Lady Of Guadalupe Catholic Church . Interment will follow by Peaceful Garden Memorial Park.

Obituary:
Tomasa "Chita" Honesto, 100 passed away Monday, January 13, 2014 at her residence. Services for Mrs. Honesto will be 10:00 am Friday, January 17, 2014 at Our Lady of Guadalupe Catholic Church with Father Andres Mendoza officiating. Burial will follow immediately at Peaceful Gardens Memorial Park under the direction of Calvillo Funeral Home. There will be a rosary held at 7:30 pm Thursday; January 16, 2014 at Calvillo Funeral Home.

Tomasa was born September 13, 1913 in Pandora to Samuel and Francisca Villarreal. She married the late Bernaldino Honesto in 1936 in Pandora. He later passed away in 1985. She owned and operated O'Donnell Restaurant in O'Donnell from 1968 to 1973 where she never met a stranger and made sure everyone had a meal even to those who could not afford much. She was awarded oldest mother of the year at Our Lady of Guadalupe Catholic Church for several years and she loved spending time with family and her grandchildren.


To order memorial trees or send flowers to the family in memory of Tomasa Honesto, please visit our flower store.