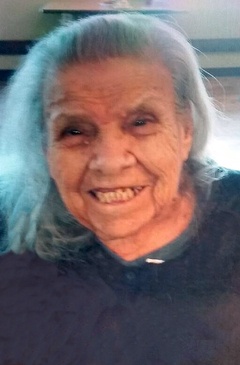 Services for Zulema G. Sandoval 92 of Lubbock will be 10:00 am Thursday, April 27, 2017 at Fountain of Life Apostolic Church with Rev. Emilio Sauceda Sr. officiating.  Burial will follow in the City of Lubbock Cemetery under the direction of Calvillo Funeral Home.  A prayer service will be held Tuesday, April 25, 2017 at Calvillo Funeral Home Chapel.

She was born June 18, 1924 in Austin, Texas to the late Blas and Carmelita Galan.

She married Doroteo Sandoval, Sr in 1945 in Big Wells,Texas. He preceded her in death in 1994.

She was very active member in the church and enjoyed singing, playing bingo, and spending time with family, we will miss her dearly.

She is preceded in death by A son Carlos Sandoval, A brother Pascual Galan, two sisters Trinidad Rosas and Maricia Reyes.

To order memorial trees or send flowers to the family in memory of Zulema Sandoval, please visit our flower store.